Dried plums contain a complex variety of antioxidants that act synergistically to protect cells and their components from oxidative damage.

Antioxidants are substances that defend the body against the harmful effects of free radicals.

Free radicals are known to be associated with the development of more than 60 diseases, including heart disease, many forms of cancer, neurogenerative diseases such as Alzheimer’s and Parkinson’s, arthritis, stroke, allergies, chronic fatigue and aging.

The optimal dose of antioxidants consumed daily should be between 3000 and 5000 ORAC units (according to The Food and Drug Admininstration and U.S. Department of Agriculture). In turn, the United Kingdom Food Standards Agency recommends a dose of approximately 3500 ORAC units (the equivalent of “5 servings of fruits and vegetables a day”).

Scientists and researchers claim that the body can effectively use only 3,000-5,000 ORAC antioxidant units per day. Any higher amount of antioxidants (an overdose in the form of dietary supplements) does not seem to create additional benefits for the body, the surplus of antioxidants being most likely eliminated from the body by the kidneys.

If a person only consumes bananas, he / she should eat 2.4 kg of bananas to get the daily dose of ORAC!

However, you should eat only 87g of dried plums! 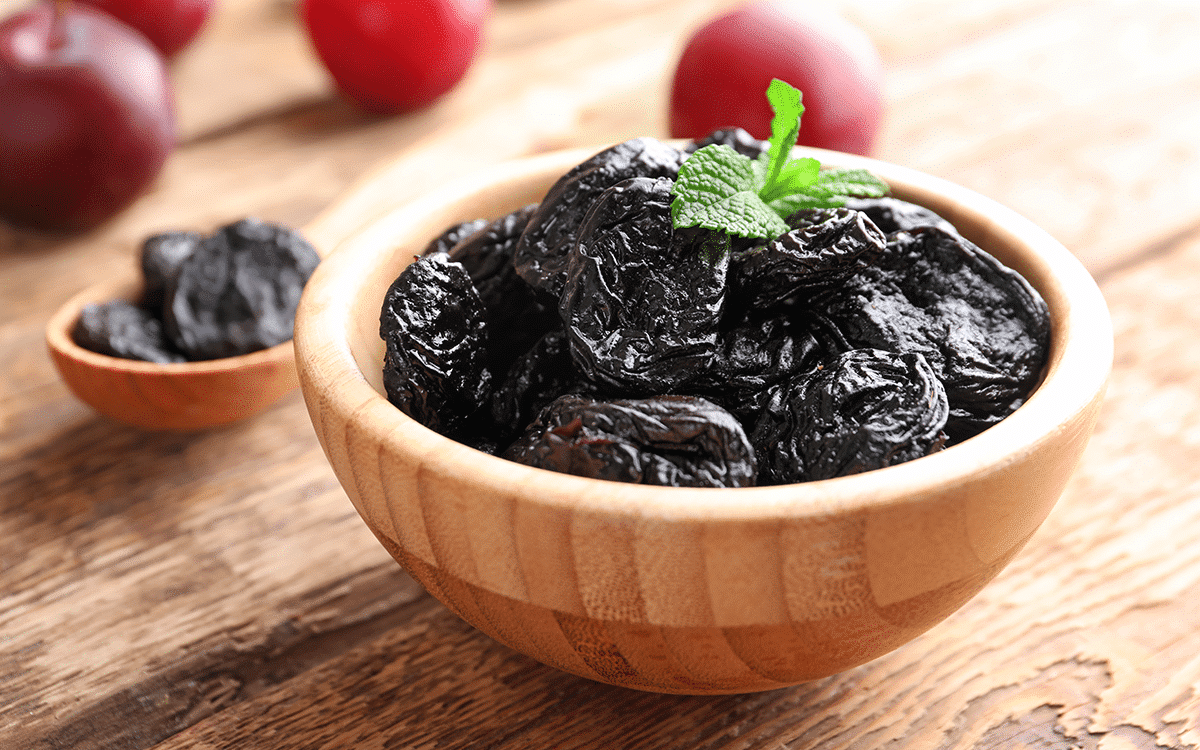 Did you know that fresh plums have only 16% of the ORAC value of dried plums?

ORAC is a standard test adopted by the US Department of Agriculture to measure the total potency of antioxidants in foods and nutritional supplements.

In addition, soluble FIBER plums help lower cholesterol by binding bile acids and eliminating them from the body through feces. Bile acids are compounds used for digesting fats that are made by cholesterol liver.

Also, SOLUBLE FIBERS from dried plums help normalize blood sugar levels by slowing the rate at which foods leave the stomach and by delaying glucose uptake (the form in which sugar is transported into the blood).

Soluble fibers also increase insulin sensitivity and therefore may play a useful role in the prevention and treatment of type 2 diabetes.

On the other hand, INSOLUBLE FIBERS from dried plums contribute to reducing the risk of colorectal cancer (by reducing the transit time of faecal matter in the colon), reducing the occurrence of gastrointestinal disorders such as chronic constipation, etc.

Insoluble plum fibers also provide food for the “friendly” bacteria in the large intestine (colon). The fermentation of INSOLUBLE FIBERS from prunes by these beneficial bacteria results in a short-chain fatty acid called butyric acid (sodium butyrate), which serves as a primary fuel for the cells of the large intestine and helps maintain a healthy colon. These useful bacteria also create other short-chain fatty acids, propionic and acetic acid, which are used as fuel by liver cells and muscles.

In addition to producing the short-chain fatty acids described above, friendly bacteria play an important protective role by disturbing the development of pathogenic (disease-causing) bacteria and preventing their survival in the intestinal tract.

It has been found that a diet with dried plums, rich in fiber and polyphenols, suppresses inflammatory activity in the body. A diet of dried plums has been associated with a lower concentration of C-reactive proteins in the blood, a marker for inflammatory diseases.

Clinical results indicate that dietary supplementation with dried plums can also prevent bone loss, because dried plums contain proanabolic factors that can dramatically increase bone volume and restore bone that has already been lost due to aging. Consumption of dried plums significantly increases serum levels of IGF-I (Insulin-like growth factor I activity) and mediates metabolic and mitogenic actions of growth hormone) and BSAP (Bone alkaline phosphatase) – a high level of enzyme isoform of alkaline phosphatase found during the period of bone growth), which are associated with higher bone formation rates.

A dry plum diet can provide effective prophylactic and therapeutic agents in the treatment of osteoporosis.

Of all the fruits, dried plums seem to be the most effective for preventing and reversing bone loss.

Even though food supplement manufacturers are trying to convince us that consuming food supplements can stimulate our physical and mental health, sometimes more efficient than natural foods, there is a problem. Most research focuses only on certain isolated chemicals and their extracts in concentrations not found in naturally occurring foods.

Are you ready to eat 28 cloves of garlic a day (as much as one pill of dietary supplement), to lower cholesterol and blood pressure?

Although it is proven that adopting a diet rich in fruits and vegetables, along with physical exercise and a healthy lifestyle, are the most important factors for having a long and healthy life, you should remember that they do not replace conventional medicine.

No content on this site should ever be used as a substitute for the recommendation of your doctor or other qualified clinician.