Cranberries or mountain currant fruits are also called berries. These fruits have the shape of small round apples (white when raw and red when ripe), so they are popularly called cranberries. They are the fruits of a shrub that prefers mountainous areas, in North America, Asia and Europe, generally quite high altitudes.

It also appears in our country, especially in the Carpathian Mountains. It has branched stems that make it look like a large bush, with glossy and oval leaves, dark green on the top and light green on the bottom, and the flowers grow in small groups of no more than six and have a white color. pink.
The flowers can be admired during their flowering period, in summer, in July. The fruits are juicy, usually harvested in late autumn, in September-October, then they are red and ripe.

Cranberry fruits are used because they have nutrients that increase the body’s immunity but also the leaves of the shrub that are used in folk medicine for therapeutic purposes. The leaves have a bitter taste, astringent effect, are used dry to prepare a tea that can be a good remedy in cases of cystitis, urethritis and other urinary tract infections:

Put 4 teaspoons of dried herbs in a liter of boiling water, boil for 10 minutes, strain and drink one or two cups a day for treatment. Cranberry juice helps in the treatment of urinary tract infections, fights certain bacteria that are resistant to antibiotics, can inhibit the development of Helicobacter pylori bacteria, can alleviate diseases of the oral cavity (periodontitis and gingivitis). 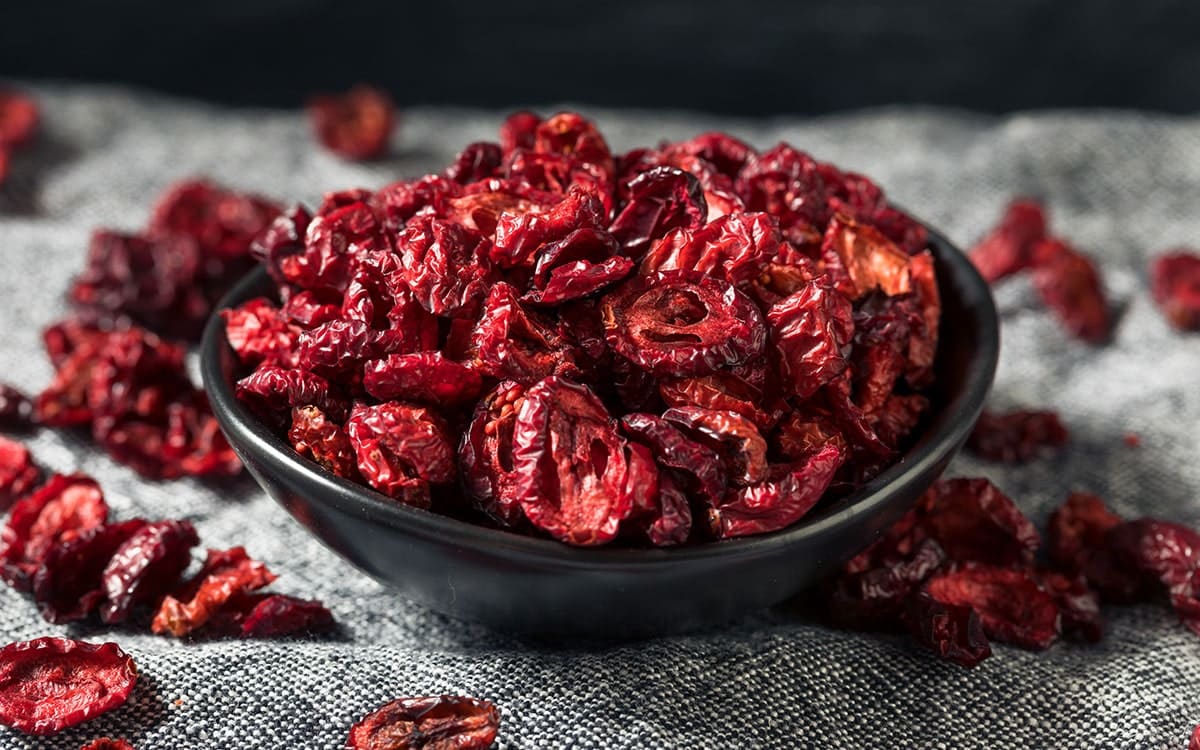 At plafar there is a medicinal product – cranberry branch extract – which is a good remedy in cases of osteoarthritis, arthritis, constipation, intestinal syndrome, is a product with anti-infective and therapeutic properties for diseases of the osteoarticular, intestinal, urinary and genital tract.

Cranberries are appreciated in our country, and one of the most sought after products in Romania is called Orlando’s Dessert Candied Super Fruit Cranberries, which contains dried fruits that are very healthy, especially due to the nutrients in their composition. Fruits are very useful for strengthening the immune system, they contain magnesium salts, vitamin C, salts of organic acids, tannins, flavonoids, vitamins and minerals, very good antioxidants for health.

Due to the rather significant tannin content, cranberries help fight infections and therefore prevent and cure infectious and inflammatory diseases, and in addition can successfully remove sand and small kidney stones. Cranberries have tonic, antipyretic and anti-inflammatory properties, are useful in the treatment of colds and to increase the body’s immunity. Such fruits are effective for the health of the cardiovascular system because they are a source of magnesium, potassium and vitamin C, all increase the elasticity and strength of blood vessels, reduce cholesterol levels, fight atherosclerosis and blood clots.

Cranberry antioxidants improve health, fight the harmful attack of free radicals and prevent premature aging of the body. By consuming antioxidants you help your immune system to regenerate, eliminate toxins from the body, which can accumulate daily due to diet, stress, pollution, fatigue and other factors. The healthier your body, the more energy you will have, the stronger your heart and clearer your mind will be.

Antioxidants can fight aggressive compounds in the body – free radicals – this improves metabolism and protects cells, increases immunity and the body will function better. These fruits contain fiber and other nutrients that improve the health of the digestive system, relieve the symptoms of diseases and diseases of the gastrointestinal tract (namely constipation, colitis, gastritis, ulcers). Cranberries are very good for anyone because they have vitamins and minerals, they are recommended by specialists in nutrition and folk medicine.